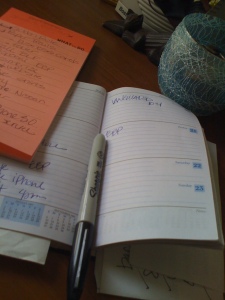 After my Blackberry went through the washing machine in February, I had to make a few decisions. I had two cell phone contracts. One with Verizon and one with AT&T.
I know, I know. That’s one too many.

The second contract with Verizon was for a business cell. I hadn’t been with that “business” since December. The contract had 22 months left on it but I was compelled to cancel. I’d had the same cell number since 2001 so that phone number and contract won out. And later on, when the AT&T contract renewed, I could get an iPhone. If I really wanted one.

Initially I was torn. I’d been a Blackberry gal forever. Forever.

Now I can’t believe there was even a question.

I went to the Apple Store yesterday and bought an iPhone.

Pardon me, I’ve got to go. I have a huge hole of online data I need to fill. I’ll see you sometime next week.