Continuation of  The Toe

I sat on the cold xray table hoping against hope that everything was cool. I mean, I’ve broken lots of my bones. I’ve broken my nose at least twice and banged up/and or broken toes more times than I can count.  I always bounce back.  No problem, right?

The doctor came in to the xray room with a shiny new set of crutches.  They were still in the wrapper.  As he removed the plastic he said, “I need you to not put your foot on the ground, at all, until you see a podiatrist or orthopedic. You’ve a spiral fracture and I’m afraid that even a small bump will do irreparable damage.”  Seriously? Several Cocktails and cloves and this is what I get?  Yeah, I pretty much ran out of drunken-get -out -of- a-jam-cards that night.

I had one more errand to run and then it was home.  I needed to go to the liquor store to pick up a few things.  Not ironic at all.

Next steps: Home, comfort food, ibuprofen and an appointment with my podiatrist.

The podiatrist was concerned about the fracture healing properly and in a timely fashion.  Really.  I told him I was going on a beach vacation in a week and I was going whether he wanted me to or not.  His instructions?  Crutches for 2 weeks, vacation, safety first and reevaluate at 3 weeks.  Which is to say, I was on crutches for 5 days and motoring around in the boot after that.  You really can’t keep a good girl down for too long.  I even swam in the ocean while wearing the boot.  I know. I know.

Back to the podiatrist and It Wasn’t Healing, it may have even been a little worse.  So, he suggested I try an experimental device called a “Bone Growth Stimulator”  Yeah, that’s really what it’s called. Generally I don’t have a problem with that sort of thing.  These were desperate times.

The “Bone Growth Stimulator” worked its charms.  I was healed and ready to kick some ass by the end of October.

So, the moral of the story is, among other things: 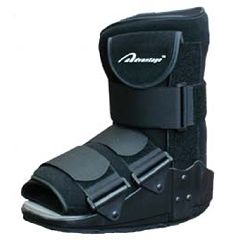 a little pellet of hell
View all posts by hellpellet →
This entry was posted in Uncategorized and tagged broken toe, crutches, orthopedic boot, swimming, the beach, vacation. Bookmark the permalink.